We are pleased to repost an excerpt from an article written recently by author and research scientist, Dr. James Lyons-Weiler. Entitled, "A Message to Ethic MDs: The Problem with the 2017-8 Flu Vaccine is the 2016-7 Flu Vaccine, this helps to answer the question asked by millions of Americans each year, "Why did I get the flu even though I got the flu shot?"  Equally puzzling should be the question, "Why is there so much pressure, and even mandates, for people to get the flu shot when its efficacy rate is ALWAYS low?" (In fact, according to the CDC's own reports, it's LEAST effective for the elderly, pregnant women and babies - who are pressured the MOST to get the flu shot.) 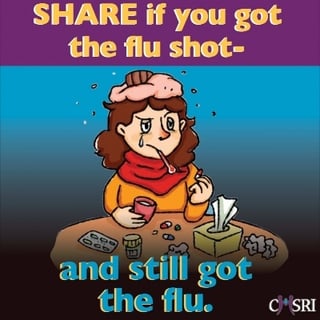 Then there's the question that most people don't even know to ask: "Why does the flu shot still contain thimerosal (mercury) when it was removed from all childhood vaccines in 2001 over safety concerns?"

There are even more troubling questions raised by Dr. Lyons-Weiler in this excellent excerpt, which we urge you to share.  And for those who were frightened or threatened into getting a flu shot this year, brace yourself for next year!

AMERICANS are highly distracted.  They won’t recall the efficacy of the flu vaccine from year to year.  That’s why Sanjay Gupta can go on the news and remind us that his 30% estimate (likely an overestimate) of how well the flu vaccine works is not like past years, the good old days in which the vaccine was 60-70% effective, and not bat an eye.

But when was the last time the flu vaccine was 60-70% effective?  Eight years ago:

This type of misrepresentation is a consistent penchant within the media and of course from the CDC to exaggerate and highly emphasize only positive views and diminish, dismiss, or ignore any negative views on the safety and efficacy of vaccines.

The reality is the flu vaccination program has an average adjusted efficacy of 40%. In 10/14 years, the efficacy was <50% effective.  That’s deplorable. And the problem is not ‘herd immunity’.  The problem is the vaccine is self-defeating.

The Jury is In: The Flu Vaccine Reduces its Own Efficacy

Too many studies now exist that have independently come to the same conclusion: increases in the uptake of flu vaccine reduces that vaccine’s effectiveness in the following year – and some studies show the negative effects of mass influenza vaccination last two years.

The studies reporting those results are reviewed in my article, “Diseases with Unknown Etiology Trace Back to Mass Vaccination Against Influenza in 1976“, and they are extensive and damning.

That post also includes the results of an analysis that I performed on CDC’s own data, showing that increases in the uptake of flu vaccine in a given year reduces efficacy of the vaccine for the following two years by a factor of -1.167.   Assuming a linear relationship, the model predicts the absurd prediction that at 93% uptake, the flu vaccine will have zero efficacy in the following two years.  That means “negative global efficacy” at or above 94% uptake.

It’s not absurd because the model is wrong; it is absurd because the vaccine reduces net immunity. Enough science exists that shows reduced efficacy due to past uptake (again, all reviewed here). It’s absurd because mass vaccination has unforeseen effects that make it self-defeating.  A better word than absurd would be “disastrous”.  More people would be diagnosed with “flu” that exist in the population at 100% coverage.  What does that tell you?

Well, being the eternal objectivist (not the Ayn Rand type, the other, warmer type), the fact is that extrapolations are not trustworthy.  And that’s true, but not in the universal sense.  If extrapolation could not be made to work, we could not have landed on the moon, on Mars, on Jupiter’s moon Titan, or driven our cars out of our driveways, for that matter.  Sometimes extrapolations do work. The model could also tell be telling us that the extent of immune impairment could be so high that the rate of infections from non-influenza viruses could surpass 100%, meaning many people could have 2, or 3 types of non-influenza respiratory viruses and multiple reasons for diagnosis with “the flu”.

I’m content not to need the extrapolation. The direct evidence that exists that Thimerosal is not safe for the human immune system is overwhelming: it shuts down the protein ERAP1,  We need ERAP1 to shorten proteins bounds for the Class 1 MHC cell surface.   Like pertussis, influenza is also sustained to a degree by silent carriers created by vaccination with non-specific effects.  Certainly live shedding is high among the vaccinated (study cited here).  Why don’t we see CDC informing every doctor to swab for influenza types A and B (including 2009-H1N1), RSV types A and B, parainfluenza types 1–4, metapneumovirus, rhinovirus, coxsackievirus/echovirus, adenovirus types B and E, bocavirus, and coronavirus types NL63, HKU1, 229E, and OC43, all types tested for by the ResPlex II multiplex assay – and each pathogen a type of viral respiratory infection that can mimic the flu?  I don’t have that answer.  But it seems since such a small proportion of cases are H. influenza infection, the default treatment of patients for “flu” without a real diagnosis would be unethical, but that’s precisely what happens.  According to Dr. Hawk, about 2/3 of the cases of “flu” seen are influenza – the rest, he says, would be false positives diagnoses (if made without swabbing).

Patients have a right to know the specific nature of their infections, and survivors in families of those who die from respiratory infections deserve an accurate cause of death. Coroners should certainly be required to provide an accurate cause of death in so-called “flu” mortalities.  Health departments should be required to count only deaths due to confirmed influenza infection as “flu” – otherwise their numbers perpetuate misperception on the risk of influenza infection, and cause fear leading to increased vaccination.  How is this seen as a good thing?  The population deserves good and honest doctors and stewards of public health.

HHS could demand swab results for all suspected cases of “flu deaths” with a press release and enforce them with random audits.  This annual ritual of fear-mongering over “flu-deaths” hides the fact that as long as thimerosal is injected into patients, they are at increased risk of other infections.  And due to heterologous immunity, even without thimerosal, flu vaccines can confuse the immune system and muddle up ineffective immune response by trying to re-purpose B-cells trained on the wrong virus, hobbling the immune system making it unresponsive to similar viruses.  Such as next year’s flu strain.

We do need objectivity to arise immediately throughout the public health system in the US, starting with HHS, then to CDC and to all Health Departments around the country.  Many studies have also found problems with Tamiflu.  But no emergency epidemiological study is addressing the question – why are so many young people dying from “flu”?   Many of the reports I’ve seen include mention that they person had not only been vaccinated, they also had taken Tamiflu. And many had taken Tylenol.   It’s time to ask the tough questions. The science is there on problems with Tylenol for vaccine-induced fever, and it must be taken into consideration.  Fever due to respiratory infections after flu vaccination is still vaccine-induced.

A look at the issues with Tamiflu (see primary scientific literature reviewed here) shows that we cannot ignore the possibility that the human immune system is not infinitely resilient, and that medicine’s approaches to tackling “the flu” is imprecise, not evidence-based, and self-defeating.  I’m not talking about the number of antigens the human body can take; I’m talking about the amount of tweaking it can tolerate, especially given the aluminum-dense childhood vaccination schedule. The allopathic medical community would do very well to heed the studies that show that Vitamin D helps alleviate both vaccine injury and severity of viral infections.  It helps resolve the unfolded protein response without killing the cells. And the science of ER stress (endoplasmic reticulum stress) shows that Thimerosal is, after all, not safe for human use.  Same for aluminum.