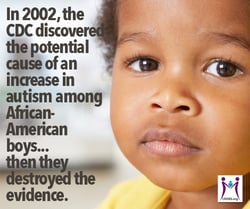 “I regret that my co-authors and I omitted statistically significant information suggesting that African American males who received the MMR vaccine before age 36 months were at increased risk for autism. Decisions were made regarding which findings to report after the data were collected, and I believe that the final study protocol was not followed.”

These are the words of a senior scientist at the US Centers for Disease Control and Prevention (CDC), Dr. William Thompson, who admitted to his lawyer and a member of Congress that he and his colleagues committed scientific misconduct in 2004 to cover up a meaningful link between vaccines and autism in black boys.

In a statement released in August, 2014, Dr. Thompson revealed that data concluding a greater likelihood that the MMR vaccine could lead to autism-like characteristics in African-American boys was intentionally removed from the final 2004 study results.

In fact, Thompson says the study co-authors “scheduled a meeting to destroy documents related to the study. The remaining four co-authors all met and brought a big garbage can into the meeting room, and reviewed and went through all the hardcopy documents that we had thought we should discard, and put them into a huge garbage can.”

Thompson retained his own copies of the study notes, however, which he provided to Rep. Bill Posey of Florida, who has called for a congressional investigation into the study.  The CDC’s claims that no connection between the Measles, Mumps, Rubella (MMR) vaccine and autism exists has long been the basis of the government’s refusal to deny compensation to the vast majority of parents of MMR vaccine-injured children.

Recently, however, the facts have come to light in the new documentary, Vaxxed: From Cover-Up to Catastrophe, which exposes the CDC’s fraud, deceit, and obstruction of justice regarding the MMR vaccine. Vaxxed has received global media attention and is waking up Americans coast to coast to the criminal activity at the CDC.

Massive efforts have been undertaken by the pharmaceutical industry to undermine the film and to prevent its showing: actor Robert DeNiro recently revealed on The Today Show that he was pressured into removing the documentary from the Tribeca Film Festival.  DeNiro, the father of an autistic son, has urged all Americans to see the film and to begin a national conversation about vaccine safety.

Several health advocacy organizations have joined us in calling on Congress to investigate Dr. Thompson, the other CDC authors of the study and the CDC’s role  in suppressing critical information.  We are also calling on state legislatures to immediately repeal all vaccine mandates until far more comprehensive independent studies – those NOT conducted by pharmaceutical companies on their own vaccines nor approved by CDC officials known to have financial ties to the drug companies --- have been thoroughly reviewed.