In chaos theory, there is a familiar metaphor known as the “butterfly effect” that suggests small changes in initial conditions (the flapping of a butterfly’s wings) can result in large differences in a later state (the pattern of a hurricane). In the area of vaccine safety, we’ve seen this play out time and again; most recently, when the misrepresentation of study data on minute components of HPV vaccines, presented before a small gathering in Tokyo in 2014, resulted in a worldwide safety proclamation upon which physicians are now basing their vaccination recommendations – and young girls are suffering. 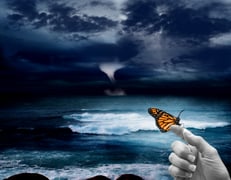 In an open letter to the head of the World Health Organization, Dr. Sing Hang Lee, MD, the director of the Milford Molecular Diagnostics Laboratory in Milford, Connecticut, claims members of the WHO’s Global Advisory Committee on Vaccine Safety (GACVS) deliberately manipulated scientific data relating to the safety of HPV vaccines Gardasil® and Cervarix®.

The letter states that the emails, obtained via a Freedom of Information request, clearly demonstrate members of the GAVCS, the CDC and the Japanese Ministry of Health, Labor and Welfare knew before the February 26, 2014 Tokyo public hearing that one of their own experts showed scientific evidence that HPV vaccination does increase cytokines, including tumor necrosis factor (TNF), particularly at the injection site compared to other vaccines. This increase can be attributed to HPV L1 gene DNA fragments, the viral DNA fragments, in the HPV vaccines that bind to aluminum adjuvants. This mechanism explains why serious adverse reactions occur more often in people injected with HPV vaccines than other vaccines, and why certain predisposed individuals may suffer sudden unexplained deaths as a result.

Yet, the GAVCS chose to suppress this information at the public hearing in Tokyo and in a subsequent CDC Technical Report upon which they based their statement of safety.

One of the ways this subterfuge was conducted was by misquoting the authors of two important papers, one based on a study funded by CMSRI: “Death after Quadrivalent Human Papillomavirus (HPV) Vaccination: Causal or Coincidental?” by Lucija Tomljenovic and Christopher A. Shaw, published in Pharmceutical Reg Affairs, 2012.

The other paper was a case report by Sing Han Lee, “Detection of Human Papillomavirus L1 Gene DNA Fragments in Postmortem Blood and Spleen after Gardasil Vaccination,” published in Advances in Bioscience and Biotechnology, 2012.

In a comprehensive article by Norma Erickson of SaneVax, Inc., that included copies of the leaked emails, Dr. Lee illustrates how the differences between and the effects of HPV L1 virus like particles (VLPs) and HPV L1 gene DNA fragments were intentionally confused by Chairman Dr. Robert Pless in order to mislead readers and policy makers who were not experts in the area.

One of these was Dr. Helen Petousis-Harris of New Zealand, from whom Pless solicited “expert” support, despite her own admission (“I do not know if I am an expert on this…”); her lack of peer-reviewed published studies (she had only written a social media blog on HPV vaccines); and comments that revealed she did not understand the fundamental nature of HPV L1 VLP as a protein.

In one of her email exchanges with Pless, Petousis-Harrison wrote, “Dear Rob, Oh dear! I am so saddened to hear how extensive the impact of the Lee, Shaw and Tomljenovic’s activities has become. I will certainly do anything I can to assist.”

The appalling and lengthy list of contradictions, obfuscations and misrepresentations by Pless, Petousis-Harrison and others appears in detail in the SaneVax article, along with the call by Dr. Lee to hold accountable “any who blindly dismiss the potential toxicity of the newly created HPV L1 gene DNA/AAHS compound in order to continue to promote HPV vaccines.”

We fervently agree.  When it comes to the health and lives of our children, we must insist that every “flap of a butterfly’s wings” be honestly and rigorously studied if we are to turn back the gathering storm of injury and illness that is already wreaking devastation on this generation.