With the discovery of autoimmune/inflammatory syndrome induced by adjuvants (ASIA), the work of leading researchers from 14 countries on the role of adjuvants in different vaccines and how they can induce diverse autoimmune clinical manifestations in genetically prone individuals has been published in the newly released medical textbook, Vaccines and Autoimmunity.

The textbook, which is intended for advanced students and researchers working in pathogenic and epidemiological studies , was edited by Yehuda Shoenfeld, MD, FRCP, Nancy Agmon-Levin, MD and Lucija Tomljenovic , PhD and published by John Wiley & Sons, Inc. copyright 2015 Wiley Blackwell. 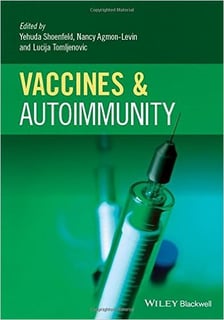 Dr. Shoenfeld is also one of the creators of the ASIA Registry for researchers to submit and analyze thousands of global cases of ASIA to compare clinical manifestations, discover common instigators and compare the efficacy of treatments.

Vaccines and Autoimmunity is divided into three sections; the first contextualizes the role of adjuvants in the framework of autoimmunity, covering the mechanism of action of adjuvants, experimental models of adjuvant induced autoimmune diseases, infections as adjuvants, the Gulf War Syndrome, sick-building syndrome (SBS), safe vaccines, toll-like receptors, TLRS in vaccines, pesticides as adjuvants, oil as adjuvant, mercury, aluminum and autoimmunity. The following section reviews literature on vaccines that have induced autoimmune conditions such as MMR and HBV, among others. The final section covers diseases in which vaccines were known to be the solicitor – for instance, systemic lupus erythematosus – and whether it can be induced by vaccines for MMR, HBV, HCV, and others.

Also included in the book are:

Copies of Vaccines and Autoimmunity can be ordered new online for $159.20 here.