While the toxicity of aluminum to the human body has been well known for over a century –President Theodore Roosevelt appointed the first board to study the health hazard of aluminum in 1907 – public policies related to acceptable levels of aluminum exposure and ingestion have ranged from liberal to nonsensical.

As a result, while the evidence against the safety of aluminum in foods, cosmetics and skincare products has continued to mount, consumer awareness has lagged far behind.  At the CMSRI, we’re hoping to inspire the general public to learn about the dangers of aluminum and to question the Food and Drug Administration’s safety policies with a new social media campaign, entitled “Makes You Wonder.”

According to the U. S. Department of Health and Human Services, aluminum is toxic to the human body -- specifically to the central nervous system -- when ingested, internalized or applied. Studies by respected medical institutions worldwide link aluminum to autoimmune diseases, particularly degenerative brain diseases such as Alzheimer’s and Parkinson’s diseases. 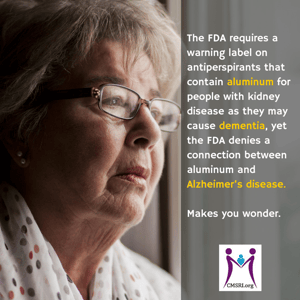 According to the Centers for Disease Control, high levels of aluminum in the body have been seen in children with bone and kidney disease. 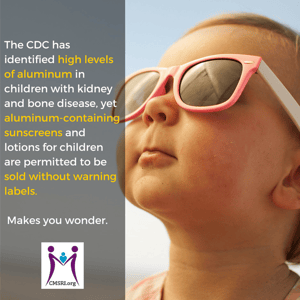 Like many of the world’s leading experts on the toxicity of aluminum, we believe that it, like lead, should be avoided due to its adverse and potentially devastating health effects. We’re launching our series of “Makes You Wonder” photo quotes on Facebook and Twitter and calling on consumers and food and drug safety advocates to Like, Share and Comment on them.  The goal: to initiate a shift in consumer preference for aluminum-free products that will provide an incentive for manufacturers to remove it from ingested and absorbed product.