It would probably surprise few people to hear that food allergies are increasingly common in U.S. children and around the world. According to one public health website, food allergies in children aged 0-17 in the U.S. increased by 50% from 1997 to 2011.

Although food allergies are now so widespread as to have become almost normalized, it is important to realize that millions of American children and adults suffer from severe rapid-onset allergic reactions that can be life-threatening. Foods represent the most common cause of anaphylaxis among children and adolescents. The United Kingdom has witnessed a 700% increase in hospital admissions for anaphylaxis and a 500% increase in admissions for food allergy since 1990. 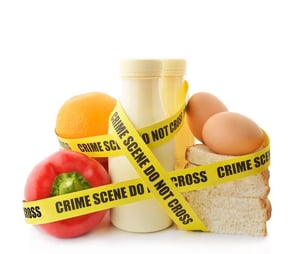 The question that few are asking is why life-threatening food allergies have become so alarmingly pervasive. A 2015 open access case report by Vinu Arumugham in the Journal of Developing Drugs, entitled “Evidence that Food Proteins in Vaccines Cause the Development of Food Allergies and Its Implications for Vaccine Policy,” persuasively argues that allergens in vaccines—and specifically food proteins—may be the elephant in the room.

As Arumugham points out, scientists have known for over 100 years that injecting proteins into humans or animals causes immune system sensitization to those proteins. And, since the 1940s, researchers have confirmed that food proteins in vaccines can induce allergy in vaccine recipients. Arumugham is not the first to bring the vaccine-allergy link to the public’s attention. Heather Fraser makes a powerful case for the role of vaccines in precipitating peanut allergies in her 2011 book, The Peanut Allergy Epidemic: What’s Causing It and How to Stop It. In that fascinating book, Fraser notes that mass allergic phenomena (called “serum sickness” at the time) first emerged at the close of the nineteenth century in tandem with mass vaccination.

What food proteins are found in vaccines? The list includes ovalbumin, casein, gelatin, and soy. As Arumugham ascertained, however, synthetic vaccine ingredients such as polysorbate 80 and sorbitol also are sourced from food items, including coconut, palm, sunflower, wheat, and corn. Arumugham observes that it is likely impossible to fully eliminate residual allergen proteins deriving from these sources. Moreover, it takes very low-level exposure to food proteins to cause allergic sensitization.

A more subtle and troubling point is that the aluminum adjuvants contained in many vaccines augment the food proteins’ immunogenicity (a substance’s ability to provoke an immune response). When numerous food proteins and adjuvants get injected in one sitting, as is the case when multiple shots are administered simultaneously, the probability of sensitization greatly increases.

The Institute of Medicine admits that food proteins in vaccines “occasionally induce…sensitization…and subsequent hypersensitivity reactions, including anaphylaxis.” Despite this knowledge, the allergen content in vaccines is entirely unregulated. No safe level or limits have ever been established or enforced for the allergens contained in vaccines.

In this context, it is hard to disagree with Arumugham’s suggested solutions. The most obvious response—one that would likely alleviate much suffering—is to remove food proteins and aluminum compounds from vaccines as soon as possible. To decrease the odds of allergic sensitization, it also makes sense to adopt the precaution of decelerating the vaccine schedule and administering one vaccine at a time. In the interim, the link between vaccines and food allergies needs to be openly discussed so that the public can be more fully informed about vaccine risks.