A Closer Look at the Rise of Chronic Illness

Much attention has been garnered over the causal relationship between vaccines and neurodevelopmental disorders like autism and Asperger’s syndrome, and for good reason. However, vaccines are also believed to play a significant causal role in many other chronic illnesses that have become more prevalent in recent decades.

In the last half century, the percentage of children with chronic illnesses like type 1 diabetes, type 2 diabetes, celiac disease, food allergies, and metabolic syndrome has skyrocketed. So dramatic is this increase, that the situation can now be considered an epidemic. Celiac disease, for example, is now four times more common than it was fifty years ago, while food allergies increased by 50 percent just between the years 1997 and 2011. Interestingly, chronic illness has become more prevalent since the introduction of and increases in routine vaccination.

So just why do we look to vaccines as a likely cause of chronic illness and disability? Findings from recent research, including Dr. J Barthelow Classen’s 2014 paper, “Vaccine-Induced Immune Overload and the Epidemic of Chronic Autoimmune Childhood Disease” provide us with some important insight.

As Classen notes, all of the chronic conditions that have risen over the last half century are dependent on functions of the body’s immune system, a system vaccines attempt to directly modify through the introduction of bacteria and viruses. A vaccine’s objective is to alter the immune system so that it can better recognize and fight a future illness. This alone doesn’t seem particularly threatening, but questionable vaccine ingredients and administration schedules domake vaccines cause for concern. 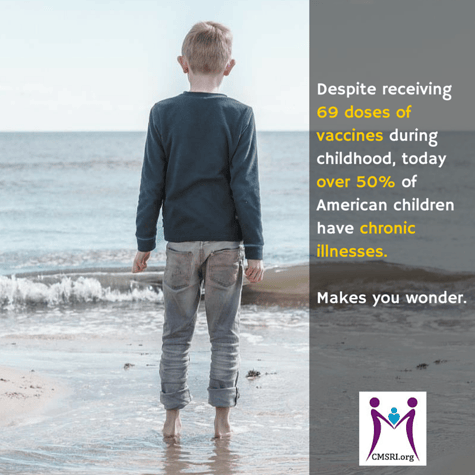 As of 1999, the childhood vaccination schedule was adjusted to include 80 additional vaccines (via multivalent strains); this means that young children are now exposed to dozens and dozens of vaccine strains that go about modifying the body’s immune system. These vaccines must also offer at least 90 percent of recipients immunity to ensure a vaccine’s commercial success. However, to guarantee that this level of immunity is reached, vaccines are designed to activate the weakest immune systems in a population; this means that those with strong immune systems receive doses that actually over stimulate their systems. An over-stimulated immune system is one that’s more prone to inflammation, allergies, and chronic illness. Further, because vaccines are highly standardized (children don’t receive vaccines that are customized to their individual makeup), there’s currently not a way to prevent this immune overload from occurring. Note too, that the agents in vaccines used to activate the immune system—aluminum, mercury, and formaldehyde, among others—are all neurotoxins.

There are additional indicators of a causal link between vaccines and chronic illness. A large clinical study of the Haemophilus vaccine found the vaccine to be a major causal factor of type 1 diabetes; comparatively, studies also found that when this vaccine administration was discontinued, rates of type 1 diabetes decreased. Type 2 diabetes and pre-diabetes have also been associated with vaccine administration, and are interestingly increasing in prevalence even as obesity rates plateau. Research has furthered demonstrated that vaccines can make recipients more sensitive to environmental exposures, which helps explain the increase in allergies. Additionally, a number of vaccines were proven (by the CDC, no less), to increase a recipient’s risk of asthma.

It’s true that there are alternate hypotheses that attempt to explain the rise of chronic illness, including hypotheses about excessive hygiene and poor diet, but none accurately address all of the aspects of this increase the way vaccines have been able to.

Ultimately, as those like Dr. Classen and the Children’s Medical Safety Research Institute argue, there remains a need for even more clinical studies into the effects of vaccines to ensure that its link to chronic illness not only becomes more widely-known, but incites the change needed to halt the chronic illness epidemic.