Those who are detained under this law could be quarantined for up to 72 hours without the right to outside contact, including the right to attorney. While detainees will be asked for consent for “quarantine, isolation, conditional release, medical examination, hospitalization, vaccination, and treatment,” the notice states that “the individual’s consent shall not be considered a prerequisite to any exercise of any authority,” meaning that the form is merely an illusion of consent and the CDC will proceed with whatever measures they deem necessary, regardless.

This proposed rule change would represent yet one more slide down a slippery slope toward a utilitarian dystopian society like the one depicted in George Orwell’s 1984. Orwell wrote the novel as a cautionary tale, not as an instruction manual. Never in the history of the world has there been an outbreak, epidemic or pandemic that could justify such gross abuses of power. Like with the abuses revealed about government spying on its own citizens, the CDC clearly does not trust people to use their good sense when they get sick to stay home or seek medical treatment when needed. If approved, this rule change would allow authorities to suspect citizens  “pre-infection” and detain them or force them to accept medical treatment they might not deem safe or necessary.

The amendment has not yet been ratified, which is why we at CMSRI are asking everyone to make a public comment to the CDC and contact your Congressmen. The deadline for comments on the proposed changes is October 14th, so act quickly to prevent this gross violation of civil liberties. 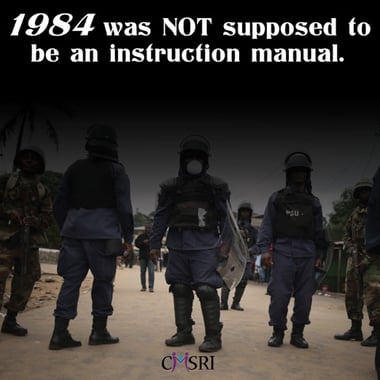 A History of Quarantine Abuse

The newly proposed rule would expand the laws regarding quarantine, but the government has already shown their willingness to bend the rules to the detriment of US citizens through a history of abuse motivated by political gain or even racial discrimination.

In 1900, San Francisco instituted a quarantine of all of Chinatown after a Chinese immigrant was found dead of what was suspected to be bubonic plague. The authorities cordoned off the entirety of Chinatown with barbed wire fencing, but only after allowing all of the Caucasian residents to evacuate. Hundreds of Chinese workers lost their jobs, resulting in mass deportations, and no confirmed cases of the plague were reported.

Much more recently, in 2014, Kaci Hickox, a nurse working for Doctors Without Borders, was taken into custody in New Jersey upon returning from service in Africa treating patients with Ebola. Despite testing negative multiple times for the disease, Hickox was detained, with doctors claiming she had developed a fever, which she denied. The fever was reported after an officer took her temperature with a forehead scanner, which, sensing her cheeks, flushed from frustration at being held without consent or course for appeal for hours, registered 101. Hickox was eventually transferred to a hospital where a more accurate oral thermometer read her temperature as 98.

“My liberty, my interests and consequently my civil rights
were ignored because some ambitious governors saw an
opportunity to use an age-old political tactic: fear.”

Hickox, who was eventually released, later sued Governor Chis Christie, who gave the order for her to be quarantined. The case was settled outside of court.

With the new proposal, healthy travelers could be detained for far less than Kaci Hickox’s imaginary Ebola fever, and be subject to forced vaccinations, which could result in any number of health complications that have been found to be associated with vaccines and their administration. Protect yourself, your health, and your privacy by fighting this proposal. Make a public comment to the Federal Register and contact your Congressmen by October 14th so that we can maintain our right to travel without fear.