Washington, DC (July 16, 2015)  One of the world’s leading experts on aluminum and aluminum-related illnesses is seeking funding for a study on the potentially lifesaving impact of removing aluminum from Alzheimer’s disease patients, announced the Children’s Medical Safety Research Institute today.

Evidence of the need for this research is based on a successful pilot study published in The Journal of Alzheimer’s Disease in 2013 that demonstrated clinically-significant improvement in cognitive function in some Alzheimer’s patients after ingestion of silicon-rich mineral water (which aids in the excretion of aluminum) over a 12-week period.

Researchers at Keele University in Staffordshire, England, led by Professor of Bioinorganic Chemistry Christopher Exley, have pioneered research into the natural history of aluminum and its effects on humans for over 30 years. They now believe that the weight of evidence that implicates aluminum in Alzheimer’s disease is so unequivocal that this must be tested in a large scale clinical trial.  In it, early-stage Alzheimer’s disease patients will be recruited to drink at least a liter of silicon-rich mineral water every day for up to 24 months.  During this time, Exley and his team will carefully monitor the state and/or the progression of memory and cognition degradation to determine if there is statistically valid proof of a contributory role for aluminum in  Alzheimer’s disease. 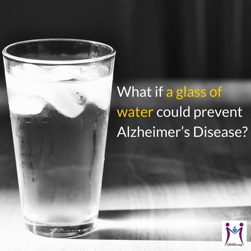 “There are many in the medical field who have given up on finding the cause of Alzheimer’s, but we have not,” said Dr. Exley, who has published previous research on the toxicity of aluminum and Alzheimer’s. “There have not been any significant advances in the treatment of Alzheimer’s disease for 40 years. We are now in position to establish if aluminum plays a role in the disease and if it does, we will have an effective strategy for treating people with the it.”

The scale of the study, referred to as “The People’s Trial for the People’s Cure,” has necessitated a public appeal for financial support which is being conducted through the crowd funding website, “Futsci” (short for Future science).  A research proposal and a video interview with Dr. Exley can be found at https://www.futsci.com/project/the-aluminium-alzheimer-s-disease-hypothesis-what-is-the-role-of-aluminium-in-alzheimers-disease.

The 3-month fundraising campaign will be launched on July 14, 2015.  If, at its conclusion, insufficient funds are raised, all donations will be returned to donors.

“Many of us have already been impacted in some way by Alzheimer’s disease and we know that it could affect us or someone close to us” said Dr. Exley. “Now is the time when we can all make a difference. This is why I believe in this clinical trial and why I am asking you all to support it.”

An estimated 5.2 million Americans are living with Alzheimer’s disease today and care for them is expected to reach $1 trillion each year in the coming decades if the current rapid rate of growth continues.