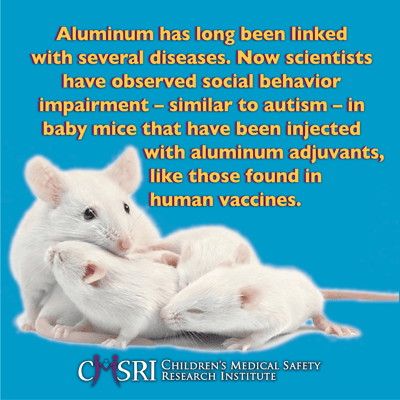 According to the authors of the study, Sneha K.S. Sheth, Yongling Li and Christopher A. Shaw, this is the first experimental study to demonstrate that aluminum adjuvants can impair social behavior if applied in the early period of postnatal development. These correlations satisfied eight out of nine Hill criteria for causality. Experimental studies have demonstrated a range of behavioral abnormalities in young mice after postnatal exposure to aluminium. To build on the team's previous work, the current study  investigates the effect of aluminium adjuvants on social behavior in mice. Anomalies in social interaction are a key characteristic of those with ASD.

Aluminium adjuvants, in particular, have been linked with a variety of neuromuscular and multiple organ system dysfunctions, including macrophagic myofasciitis (MMF), and autoimmune/inflammatory syndrome induced by adjuvants (ASIA) . One of the factors that influences the toxic potential of aluminum is the route of administration. For ingested aluminium, the poor solubility of aluminum compounds allows for its effective excretion by the kidneys; with only about 0.25% of the ionic aluminum getting absorbed into the blood for those with normal kidney function. Sweat is another major route of aluminum excretion. However, almost 100% of the intramuscularly injected aluminum (as in vaccine adjuvants) is absorbed into the systemic circulation and travels to different sites in the body such as the brain, joints and the spleen where it accumulates and is retained for years post-vaccination. Moreover, although the half-life of enterally administered aluminum is short (approximately 24 hours), adjuvanted aluminum takes much longer to be eliminated because of its exceptional affinity for the various antigens. The latter is the very feature that allows it to activate an elevated immune response and thus act desirable adjuvant.

Two other key aspects to keep in mind while addressing the question of toxicity are: (1) the aluminum dose in a given duration; for instance, the dose of aluminum in the hepatitis B vaccine which contains the lowest content of aluminum (250 μg) is five times that absorbed through 6 months of breastfeeding (55 μg) , and (2) the stage of neurodevelopment of the person being vaccinated. For example, an infant in the United States, in its first two years, usually receives 27 vaccines as part of the routine pediatric vaccination schedule; many of which contain aluminum adjuvants. This is a crucial period for major neurodevelopmental processes in an infant's brain, including the onset of synaptogenesis and extensive pruning of excessive synapses, during which the brain is highly susceptible to neurotoxic insults.

Aluminum has many effects on both the immune and central nervous systems. Effects of aluminium's neuro- and immuno-toxicity include impairment of neurotransmission and synaptic activity, disruption of the blood-brain barrier, microglial activation and brain inflammation, impairment of brain-specific gene transcription, neurite
damage, amyloidosis and impairment of genetic resistance towards autoimmunity in both adults and infants.

There has been considerable speculation on the role of vaccines in the contribution of the rising prevalence of ASD. A study by the scientists has shown a strong correlation between the rising prevalence of ASD and an increased aluminium dose through vaccine adjuvants given during early postnatal life. However, ecological studies are unable to establish causality and are primarily aimed at generating valid hypothesis that can be examined by further experiments.

Another study conducted by the team has shown anomalies in behavioral outcomes in mice injected with  aluminium as per the US pediatric vaccination schedule. The current study has been designed to build on previous work by testing for behavioral deficits specific to a core symptom of ASD, namely, deficits in social behavior.

Neonatal CD-1 mice pups were injected with either a total of 550 μg of aluminum hydroxide gel (experimental group) or saline (control) spread out during the first two weeks of postnatal life. The mice were then subjected to behavioral tests for social interest and social novelty at postnatal week 8, 17 and 29. p-Values were calculated using the Mann-Whitney and Kruskal Wallis tests.

CD-1 mice were chosen because they are an outbred strain which allows for them to mimic the genetic diversity present in humans, and to maintain consistency in experimental procedures with the scientists' previous work. All experimental procedures on animals were approved by the University of British Columbia's (UBC) Animal Care Committee (protocol #A11-0042) and were in compliance with the Canadian Council on Animal Care regulations and guidelines.

The study focused on the effects of aluminium on one key characterizing feature of ASD, namely anomalous social interaction. To investigate this, the scientists have attempted to mimic the Al load from the US pediatric schedule as closely as practically possible, in CD-1 mice in a similar manner as done in a previous study ]. For this purpose, new born mice pups were divided into two groups, Al injected (“Al”) and saline controls (“Control”), consisting of 28 and 23 animals respectively. The litters after birth were equally and randomly divided into Al and control groups, both containing an equal number of males and females. The dosage of Al adjuvant injected in mice was approximately equivalent (μg/kg) to Al exposure through pediatric vaccines in children

Social Interaction: A subject mouse was habituated to the experimental setup for 5 minutes in the center chamber followed by another 5 minutes in all three chambers. The social interaction test consisted of two parts. The first part, 10 minutes long, tested for sociability by measuring time spent sniffing an object versus a ‘stranger’ mouse. The stranger mouse was a mouse that had never interacted with the subject mouse prior to this experiment. It was kept in a wired cage to prevent direct contact between the subject and experimental mice. The wired cage, however, allowed for tactile, auditory, visual and olfactory exchange between the subject and stranger mouse. A human observer recorded the amount of time the subject mouse spent sniffing both wired cages (with stranger mouse and empty). The more time spent sniffing the stranger mouse as opposed to sniffing the empty cage determined the sociability of the mouse. An empty cage identical to that of the stranger's, was used as the object in the experiment.

The second part (10 minutes long) was designed to test for social novelty and memory. Previous studies have shown that healthy mice showed preference for social novelty over familiarity in the same test, while mice strains with an ASD phenotype showed preference for familiarity. Here, in this experiment, the subject mouse was now presented with a new stranger mouse and a familiar mouse (stranger mouse from test 1), and the time it spent sniffing both these mice was recorded using a stop-watch. The apparatus was wiped clean (with 70% ethanol) and dried between two trials to eliminate any residual odors from the previous trial. The test, including both part 1 and 2, was conducted at three time-points, at 8, 17 and 29 weeks. Protocols were adopted from previous studies on behavioural tests specific to ASD-like phenotype.

While the underlying pathways through which aluminium impairs social behavior are unknown, it seems plausible that aluminium impacts different behaviors at varying severities and neurodevelopmental stages because of its interactions with multiple neural pathways and immune molecules. In this study, while it seems to affect social interaction, both in early development and adolescence, social novelty appears to be spared at adolescence. Overall, it appears to be that aluminium treatment in this model system impairs both sociability and social novelty early-on in development, however, the effects of aluminium on social behavior over time are less consistent and clear. Many studies have shown that exposure to aluminium is linked with memory deficits in humans and rodents. Chronic exposure to aluminium has also been associated with decrease in acetylcholine levels which is an important neurotransmitter for memory and learning processes.

Previous studies have linked aluminium exposure to ASD. Social interaction deficits are one of the three core symptoms of ASD. This study represents the first study on social behavior in mice after early exposure to aluminium adjuvants and has found that aluminium impairs social interaction in mice in some instances.  However, this study alone cannot make any substantive claims regarding the link between aluminium and ASD in humans. Future studies that look for changes in biomarkers (such as thyroid-stimulating hormone, interleukins, etc.) and gene expression changes alongside behavioral outcomes will be more informative in establishing this link.