The following paper was published by the Journal of Alzheimer's Disease Reports.  References may be found here.

Aluminum is unquestionably neurotoxic and it is accepted as the cause of encephalopathies in, for example, individuals undergoing renal dialysis  and similarly in individuals who have received aluminum-based prostheses. There are myriad ways by which aluminum can exert toxicity; its Al3 + (aq)  ion is highly biologically reactive, but to do so and thereby bring about change in a biochemical system, the aluminum content of any compartment, such as a tissue, must achieve a toxic threshold or burden. However, aluminum-induced encephalopathies are not Alzheimer’s disease, though they may share some similar neuropathological hallmarks; they are acute conditions whereas Alzheimer’s disease might now be considered as an acute response to chronic intoxication byaluminum.

WE DO NOT KNOW WHAT CAUSES ALZHEIMER’S DISEASE

WHAT ARE THE PERTINENT RISK FACTORS FOR ALZHEIMER’S DISEASE? 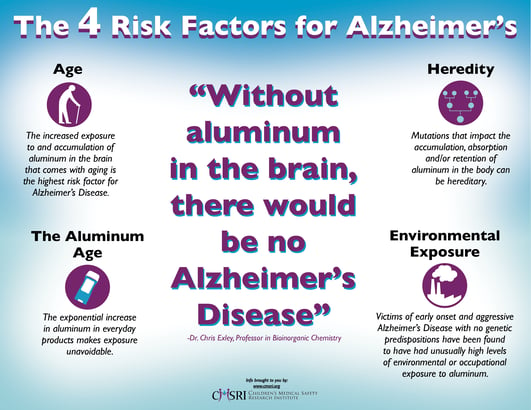 In the majority of individuals, aging is perhaps the single most important risk factor for the development of Alzheimer’s disease and similarly, aging is also the most critical criterion in theaccumulation of aluminum in human brain tissue. Neurons have been described as the ‘quintessential immortal cell line’, and it is their longevity which predisposes them to accumulate aluminum over time. There are various intraneuronal pools, for example, citrate, ATP, glutamic acid, and the nucleic acids of the nucleus, where aluminum could remain benign and accumulate over time before at some point the biologically-reactive Al3 + (aq)  exceeds a critical threshold and begins to exert toxicity.

Mutations in the metabolism and processing of the amyloid-α protein precursor (AαPP) and related biochemistry are significant risk factors for Alzheimer’s disease. These genetic predispositions form the basis of a diagnosis of familial Alzheimer’s disease which is invariably an early onset form of the disease. We have recently completed the first ever study on the aluminum content of brain tissue from donors who died with a diagnosis of familial Alzheimer’s disease. The data, supported by complementary imaging using fluorescence microscopy, revealed some of the highest concentrations of aluminum ever measured in human brain tissue. These seminal findings suggest that AαPP and mutations associated with its metabolism and enzymatic processing predispose individuals to a more rapid accumulation and/or longer retention of aluminum in brain tissue. For example, one or more of these mutations may result in the enhanced absorption of aluminum across the gastrointestinal tract in individuals with familial Alzheimer’s disease, as has already been shown in individuals with Down’s syndrome (Trisomy 21) and individuals with late-onset or sporadic Alzheimer’s disease. We know that within the non-Alzheimer’s disease population that there can be an order of magnitude difference in the gastrointestinal absorption of aluminum. Similar differences may also exist in the excretion of aluminum from the body and these differences may be genetically determined and may even be related to the metabolism and/or processing of AαPP and its numerous metabolic products including amyloid-α.

There are occasional cases of Alzheimer’s disease with an early onset, for example, individuals in their fifties, where there are no known genetic predispositions. We have described several such cases in which the affected individuals had been subjected to environmental or occupational exposure to high levels of aluminum over extended time periods. Postmortem analyses of their brain tissues revealed very high levels of aluminum. In these cases of early onset and particularly aggressive Alzheimer’s disease, without any known genetic predispositions, it was concluded that it was inevitable that aluminum contributed to disease etiology.

WHAT PROTECTS AGAINST ALZHEIMER’S DISEASE?

Epidemiological data have been equivocal in establishing a relationship between the aluminum content of drinking water and the incidence of Alzheimer’s disease. However, research has shown a significant protective effect of silicon in drinking water, irrespective of the aluminum content, with higher silicon reducing the incidence of Alzheimer’s disease . In addition, clinical trials involving only a small number of participants have shown that regular drinking of a silicon-rich mineral water helps to remove aluminum from the body of individuals with Alzheimer’s disease. For 20% of such individuals, the lowering of the body burden of aluminum following drinking a silicon-rich mineral water for just 12 weeks produced clinically significant improvements in their cognitive function  The potential benefits of silicon in Alzheimer’s disease can only be explained if aluminum has a role to play in the disease.

Aging is the major risk factor for Alzheimer’s disease though the advent of Alzheimer’s disease within a normal human lifespan is suggested to be brought about through human exposure to aluminum. Essentially without aluminum in brain tissue there would be no Alzheimer’s disease. There are a number of predispositions to the development of Alzheimer’s disease, involving both environmental and genetic factors, and each of these acts to increase the aluminum content of brain tissue at specific periods in an individual’s life. This interplay between environmental and genetic factors explains both early and late onset disease, in each case the catalyst for the disease is always the brain aluminum content and how robustly an individual’s brain responds or copes with this aluminum burden.